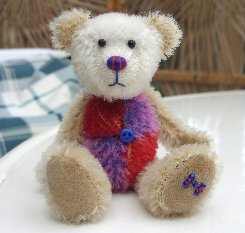 This month we have started a new range which we have called Pieces of Eight because their bodies are made of eight pieces of fur. Each bear is named after a Pirate because of the "pieces of eight" connection and this is Worley. He is named after Richard Worley who was the pirate credited as one of the first to fly the skull and crossbones flag. Worley is 4" tall and is made of a selection of fur, his arms, legs and ears are made of short, straight, deep cream Hembold mohair and his head is made of velvety soft, short, dense white mohair. For his body we have used two-tone Hembold mohair, blue backed with a purple pile and orange backed with a red pile and it is stitched together in the Harlequin style. He has toning dark cream cashmere pads and paws, a blue stitched nose decorated with red thread and a blue belly button. We have filled him with steel shot so he has a nice weight and he has shiny black English glass eyes. I do hope that you like him, Worley is very distinctive and costs £42 plus postage.

Please note that as with all our bears, Worley is not a toy and is not suitable for children.

Sorry - Worley has been adopted.